The Best Christmas Markets in Sweden

You can read my (very long) guide to the best Christmas markets in Sweden here.

Now I am off to Sigtuna, the oldest town in Sweden, to visit the markets there and have some glögg with friends. There is even a chance of snow tonight, so I am very excited. Have a great Sunday! 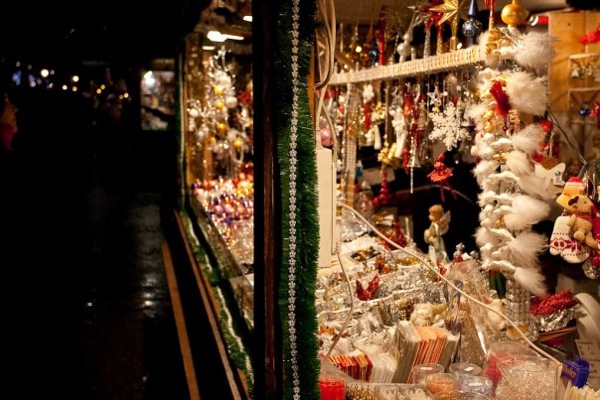 Here is my old recipe for gingerbread snowflakes. They are delicious and very cute, perfect for Christmas time. 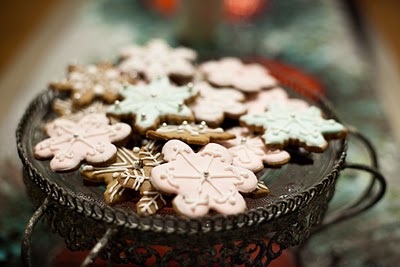 Preheat your oven to 180 degrees Celsius.

Combine your butter and sugar in a mixing bowl and when smooth separate your egg and add the yoke into the mix and combine. Combine in the golden syrup.

Sift in the flour, bi carb soda and spices and combine with the rest of the mixture.

Knead into a smooth ball and wrap in cling wrap and then place in the fridge for at least an hour, but I would recommend a couple of days so the spicy flavours thoroughly infuse the dough.

After at least an hour (I left mine in the fridge over night), take the dough from the fridge and lightly dust a clean surface with some plain flour and well as lightly dusting your rolling pin with flour as well.

Take a little of your dough and roll it until it is fairly thin, no more that about 4 mm high and put them on trays covered in baking paper and place them in the oven for about 10 minutes until they are golden brown.

Repeat for the remaining dough.

Once the gingerbreads have cooled, it is time to ice them.

For the icing put your left over egg white to good use by using an electric mixer to mix it until it forms fairly stiff peaks and then sift in the icing sugar and combine. Add in a couple of drops of food colouring if you like. I used a couple of different bowls and added red to one, blue to another and left another white.

The icing part took me a looooong time to get the hang of – not only to get the correct consistency for the icing (add more icing sugar for finer details, water to thin), but also to be able to ice without the snowflakes looking like they had been iced by someone who had just had 7 bottles of vodka. Finally after a about 10 cookies that looked so ugly I made Geoff eat them so they would not see the light of day, I got the hang of it.

I am looking forward to making more soon to practice my icing skills (and because they are delicious!).

Sometimes you arrive in a place and you simply know it is home, you feel it somewhere inside, you can’t explain it. For some people it is Paris, the first glimpse of the Eiffel tower, the lights sparkling on a winter evening, for others it is the bustle of India, the vibrant colours, the atmosphere, and for others, the beaches of Spain, the delicious food and the summer nights that never end. That is how I felt arriving in Vienna for the first time. I was 19, and I arrived to study German for three months. I didn’t know a word of German, except perhaps ja and nein, nor did I really know anything about Vienna or even Austria at all, although I think somehow I already knew I would fall in love with the city. 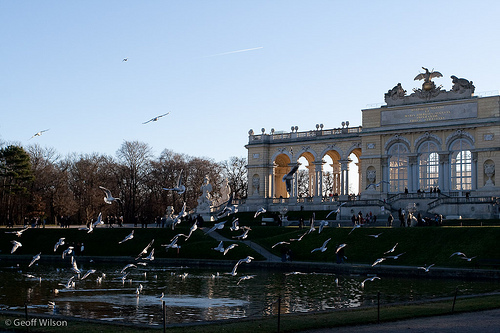 The driver started the car and we slowly drove out from the airport. It was then that I knew this was a place that really resonated with me, even though all I could see was the highway stretching before me, the industrialised surrounding areas, nothing of beauty. I arrived finally at my new apartment above a bakery -I can’t remember which district it was now- where I was to live with six or so other German language students. The landlady opened the door and asked me if I spoke German, which I didn’t, her brief explanation to me about the workings of the house were the only English words she would speak to me for the remained of my time there. The apartment was fine, a perfect student hangout with great housemates from around the world, and with the added bonus of free bread and pastries every evening from the bakery downstairs. There are so many things I love about Austria: the beauty of the cities and of the surrounding nature, the mountains, the delicious wintery food, the fact that the amazing opera singer Anna Netrebko is just as famous as a movie star (or terrible reality TV star), the ball season, the amazing music made accessible to everyone in Vienna, drinking wine in a Heurigen with friends. But it wasen’t these things that connected me to the city. It was something else. 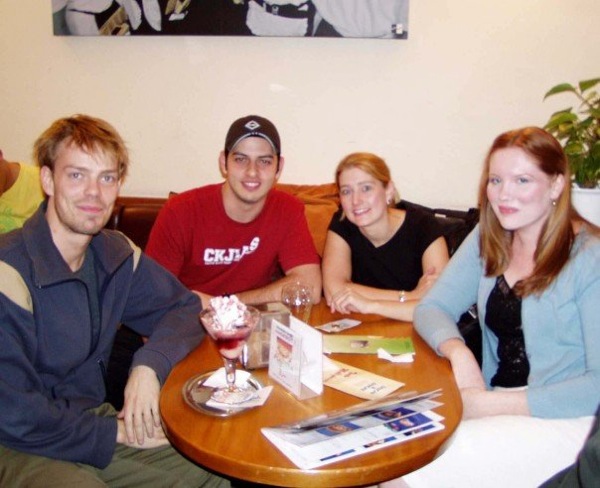 With my housemates in Vienna back in 2003

I feel a similar connection to Melbourne (I loved it so much I had my parents send me to boarding school there), and I didn’t feel it when I lived in London, or in the various other cities I have lived in Australia. Somehow I know I will feel at home in the same way when I finally make it to Switzerland. I have lived in both Melbourne and Vienna on and off over the last 10 years, and the sense of happiness I feel in both cities has never dulled, which makes me realise it is not just a feeling of happiness one inevitably experiences during a fun extended holiday or student exchange. The feeling remains somehow, even when life is not going well all of the time.

Recently a friend of mine asked what my link to Sweden was – and I realised, while I really enjoy living in Sweden, I especially love the language, and have some very good Swedish friends, my link is fairly weak. Sweden does not feel like home to me, in the same way Vienna and Melbourne do. I enjoy living in Stockholm, it is a beautiful city, I loved studying in Uppsala, but for me, there is something missing, despite nothing being wrong. And yet I know people who hate Vienna and love London and Stockholm.

The reason I loved Vienna before I even really saw it is really just a personal connection that is impossible to really explain or understand. Of feeling at home somewhere, even if you are not born there. A sense of belonging.

On Saturday, Geoff and I joined the Stockholm International Researchers Association on their annual trip to the Taxinge Slott Christmas Market, about an hour away from Stockholm. 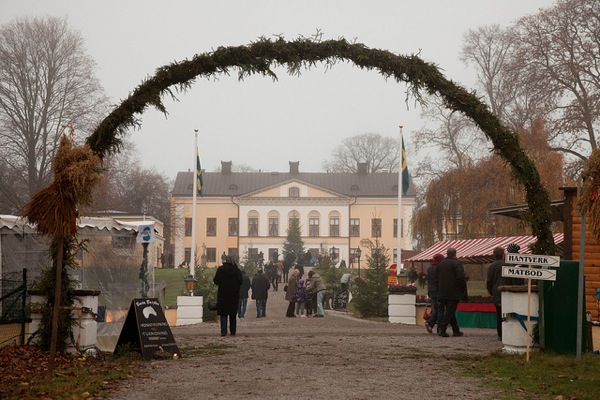 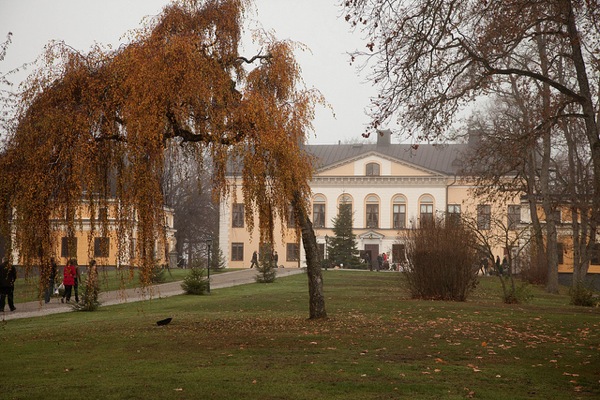 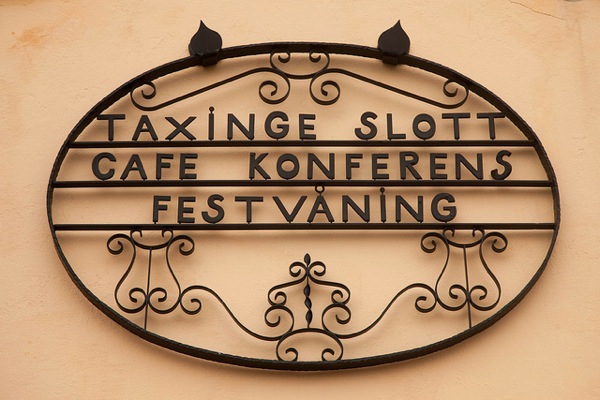 We began with coffee, biscuits and a delicious smoked ham sandwich inside the castle, during which the local farmer who renovated Taxinge from its very dishevelled state many years ago, told us about the history of the castle, and about how his wife and daughter began the cafe and still bake all of the cakes for which Taxinge is now very famous. 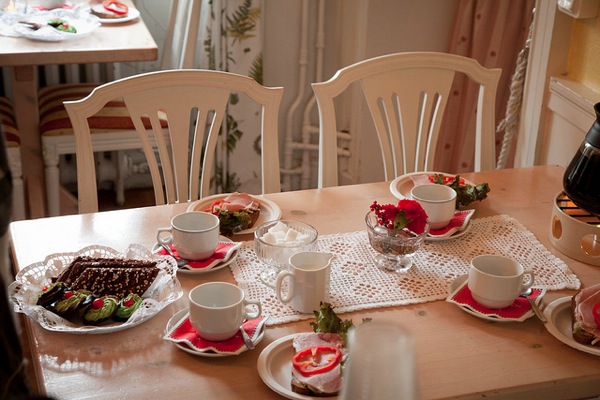 The Christmas Market was lovely – sadly you can’t take pictures inside, but they sold many local handicrafts such as Swedish advent candle holders, Christmas decorations, plenty of warm woollen hats, socks, gloves, and jumpers to keep you warm in the freezing Swedish winters, tiny little red and white spotted mushrooms made of pottery, mugs, biscuit cutters, turned wooden objects, candles, items made of straw, and plenty more.

Here is a store selling wreaths – one is now hanging on my wall. 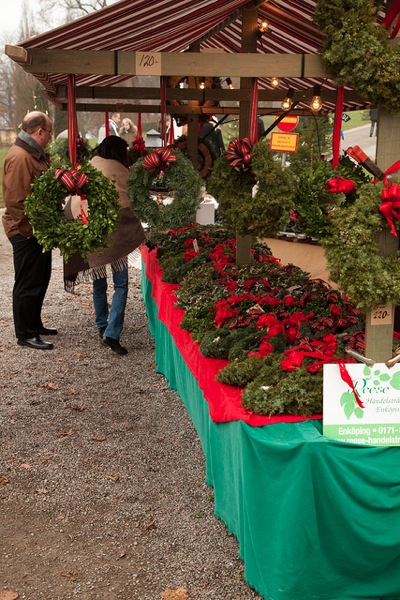 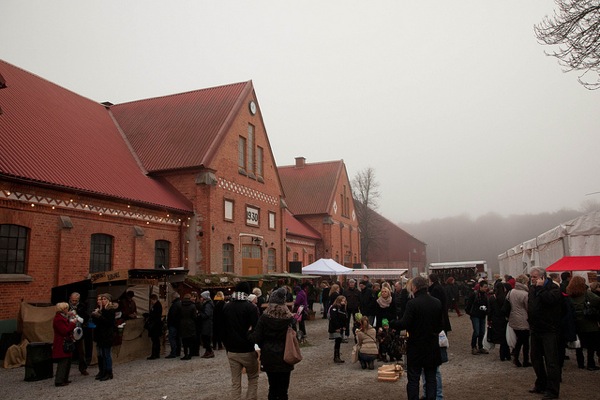 A Julbock or Christmas goat: In Sweden at Christmas time Gävle famously builds a huge straw version of the goat, and inevitably people attempt (and normally succeed) in burning the poor thing down. It’s a bit of a national sport really, and English bookmakers even take bets on the likelihood of it surviving. The official line of the inhabitants of Gävle is that burning the goat is a very bad thing, however I am sure they are just as entertained as everyone else as to whether or not the goat will survive, as at the end of the day, a straw goat happily sitting in a square for the winter is not very exciting really. Last year it was reported that the guards protecting the Julbock were offered a bribe to leave it unprotected so that it could be stolen by helicopter and taken to Stockholm… but their love for the goat proved too strong and it survived intact. Let’s see what happens in 2011…

Luckily this one also survived (at least) the first day of the Christmas Market without falling prey to a firebug. 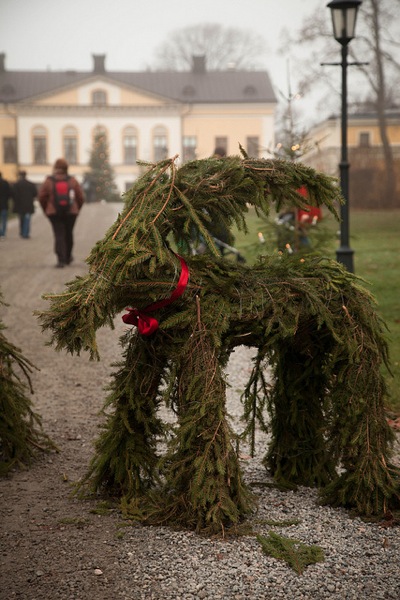 Then it was off to see the park and land surrounding Taxinge. Some local horses: 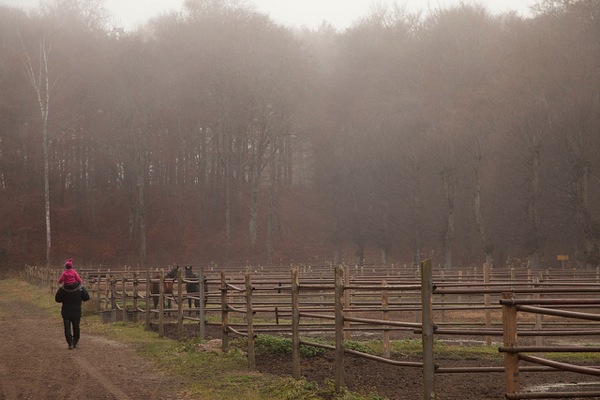 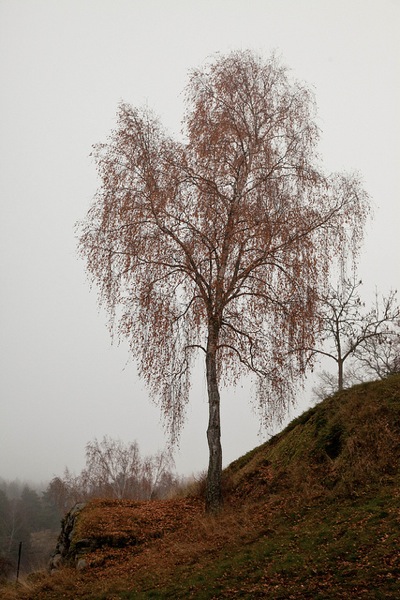 It was a very misty day, which made the view of the lake quite magical. In summer a steam ship operates from the city hall in Stockholm and takes you to Taxinge to enjoy all of the delicious homemade cakes. I am looking forward to going back again then. 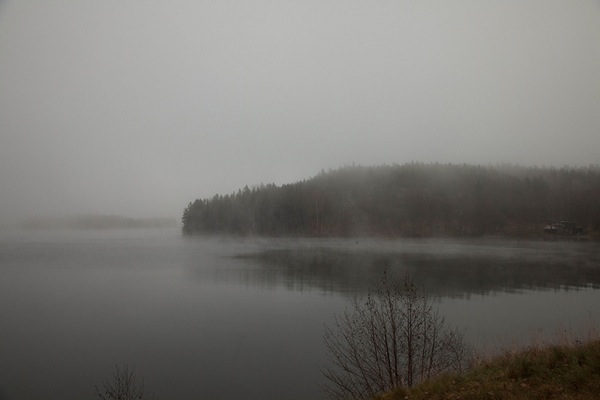 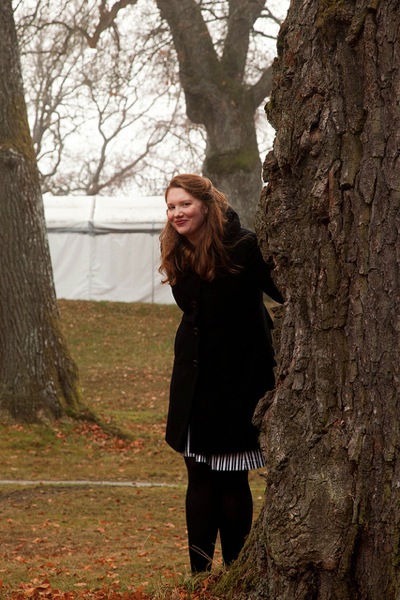 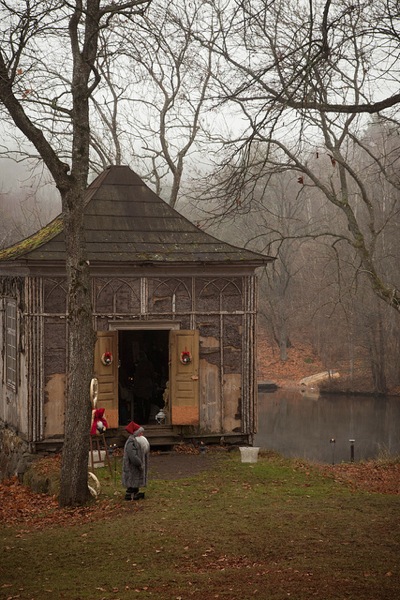 And of course, some traditional red Swedish houses located in the grounds. I would like to have one of these in a forest one day. 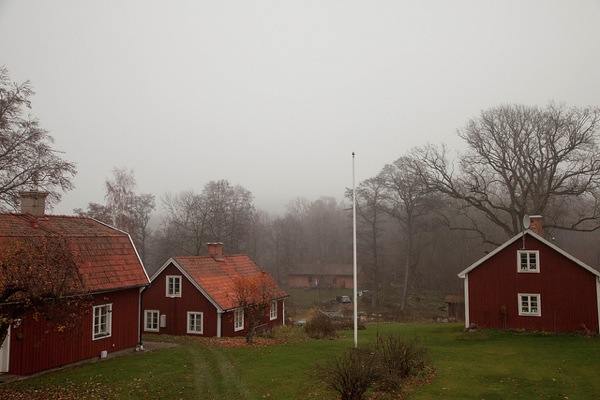 The Christmas Markets are open at Taxinge again on the 17th to the 20th of November, and entry is 70 SEK.
11 Nov 2011 Posted by Michelle in Expat Life, Sweden | 4 comments

This last week has been a bit crazy. We moved apartments (for the third time this year) in Stockholm – and luckily our new one is for a year, complete with Kasper our new pet cat, while his owner works in the Congo. 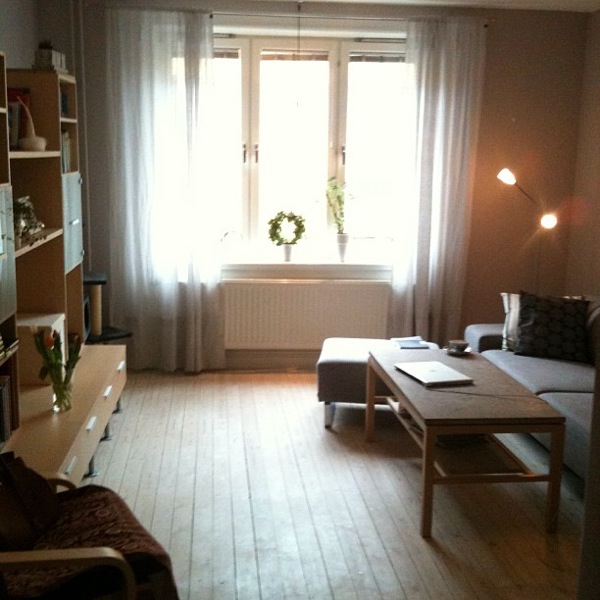 Note my wreath plant – a featured item in every Swedish home – my orchid (another pre-requisite) lives in the kitchen.

This week has also included two trips to the Migrationsverket (The Swedish Migration Board) to have my biometrics taken for my new residency permit. You normally only have to go once – however on my first trip I forgot to bring my new address with me, and as luck would have it, my phone was sitting patiently at home on recharge, so I wasn’t able to call Geoff to ask him. So back I went the next day.

The Migrationsverket was actually very simple and quick to navigate. It opens at 9 am, so I arrive at 8.45 or so, joined the end of the queue (there were about 30 people before me) and at 9 am we were allowed to take a ticket (ticket machines are a popular feature just about everywhere in Sweden) and only 15 minutes later I was called up to have my biometrics taken – a finger print, my photo and height, all over in 10 minutes or so.

Now on Friday, only 4 days later, I have my new residency permit! That said, Geoff is still waiting for his and he had his biometrics taken 2 weeks ago, so I suppose it depends on who is processing it. Now we are one step closer to the elusive personnummer! One we have that, the world of Sweden will open before us! Well… at least we will be able to order things online from IKEA.

So a great start to a weekend that involves a trip to a Christmas market at a castle and a friend’s housewarming party.